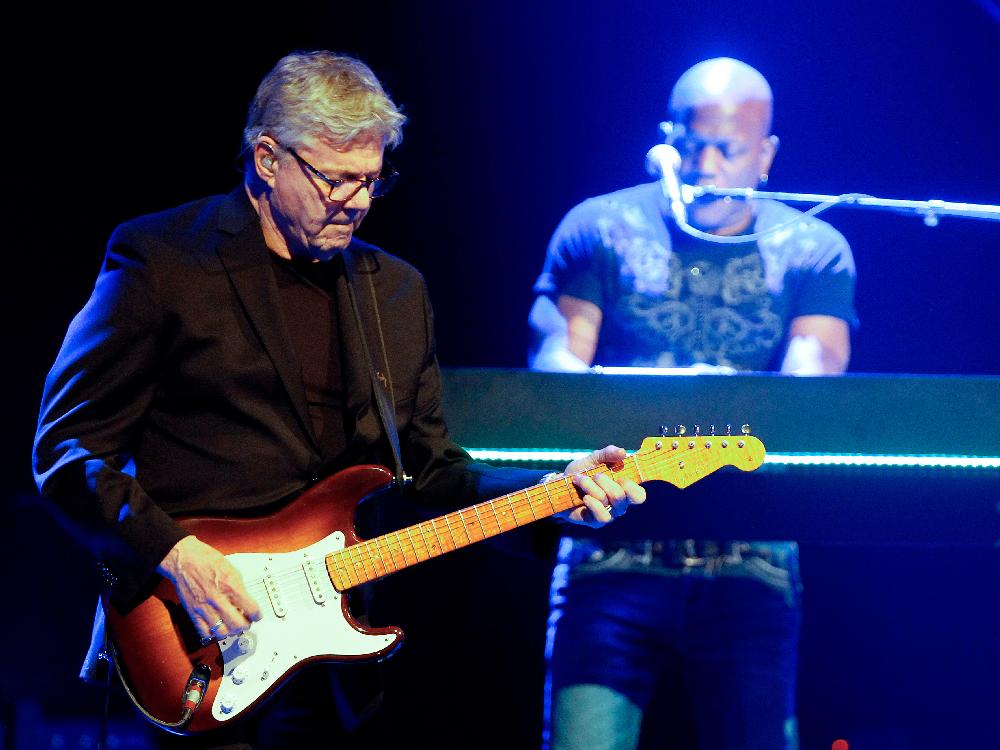 A tip of the hat to keyboard player Joseph Wooten, who got funky on Take the Money and Run and an extended Fly Like an Eagle

If your nostalgia of choice is FM rock radio from the 1970s, the Steve Miller Band-Garland Jeffreys double bill Friday night at Salle Wilfrid-Pelletier of Place des Arts was right down your alley.

Veterans Jeffreys and Miller helped launch the 36th edition of the Montreal International Jazz Festival by delivering sets heavy on their best-remembered songs from the “Me” decade to a mostly older audience quite happy to relive their memories while seated, thank you very much. Only toward the very end of Miller’s performance were they coaxed to their feet to do a little two-step and some polite hip-shaking.

Jeffreys toyed with the very definition of an opening act by playing a full hour. In fact, he cut five songs from the set list, having been given the “one more” sign from stage left. The warning came after the band had stretched out on a lengthy, dramatic reading of Mystery Kids, which included a harrowing reminiscence of paternal beatings.

All in all, though, Jeffreys’s set was the more interesting of the two. A generous helping of material from his 1977 breakout record Ghost Writer pleased the crowd, notably a chillingly beautiful reading of Spanish Town and the New York strut of the bona fide classic 35 Millimeter Dreams.

Supplementing the oldies with excellent recent material like Coney Island Winter and Til John Lee Hooker Calls Me, the singer showed that he still has the will to take chances and a hotshot band that can navigate a well-paced and satisfying show. Let’s hope he makes good on his promise to come back and do some headlining dates.

Miller’s 90-minute set couldn’t have failed to send people home with what they came for: note-perfect, human-jukebox interpretations of the biggies from his most successful chart period (1973 to 1977, give or take).

At times, the guitarist, looking healthy and somewhat professorial, gave us a peek at the blue heart of his music, most obviously during his takes on Little Walter’s Blues With a Feeling, Johnny “Guitar” Watson’s Gangster of Love and T-Bone Walker’s T-Bone Shuffle.

And certainly there were small musical revelations, mostly centering on Miller’s technique and creativity as a musician – a gift that is too seldom talked about. His high string-bending and methodical descent to the lower notes during the nursery-rhyme catchy Abracadabra, the way he stretched out one note during a wailing guitar break on Space Cowboy, his harmonic duet with second guitarist Jacob Peterson, followed by a particularly melodic solo, and his flat-out country picking on Dance Dance Dance were only some of the moments that provided a depth of artistry transcending classic rock.

The band deserves some love, too. A tip of the hat to keyboard player Joseph Wooten, who got funky on Take the Money and Run and an extended Fly Like an Eagle, drummer Gordy Knudtson, whose frequent cymbal attacks brightened the sound considerably and whose astonishing precision on Shu Ba Da Du Ma Ma Ma Ma really sold the song, and bassist Kenny Lee Lewis, the man adroitly anchoring the basic rock pulse.

Still, the Miller Band hits have aged less gracefully than, let’s say, the smooth soul successes of Miller’s erstwhile bandmate Boz Scaggs, from the same era. Rock’n Me, for example, with its chugging arena-rock power chords, could have been dropped in the middle of a BTO album without anyone being the wiser. Similarly, the riff-rawk of Jet Airliner and the funk lite of Fly Like an Eagle do little more than bring back memories of CHOM’s glory days.

In the end, many of the band’s best-known songs are simply of their time. But as long as Miller and the boys keep playing them so flawlessly, the “old jokers” he greeted from the stage will be there.

Photos by Allen McInnis of the Montreal Gazette. Click here to see a photo gallery of scenes from the opening night of the Montreal International Jazz Festival’s 36th edition.