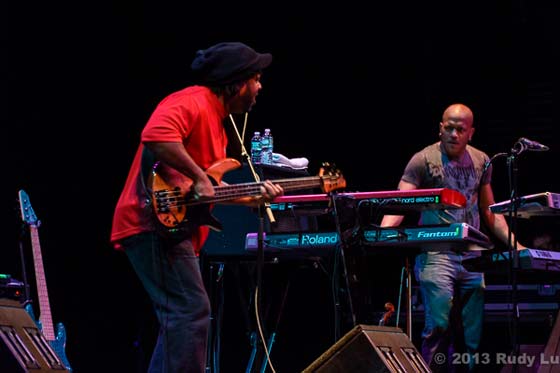 The Wooten Brothers’ concert at The Egg last Sunday evening can be summed up in two phrases. 1) The family that plays together, stays together 2) Variety show.

The mega-talented Wooten clan rocked The Egg and kept the audience entertained with everything from funky originals to R&B with smatterings of classical to Led Zeppelin covers during their roughly two-hour, non-stop show.

Opening with a Sly Stone medley, then slowing it down with a ballad and then the original “Pentagon Square” (featuring quotations from “Carole of the Bells”), the Brothers showed their talent and versatility by consistently changing up the pace and rhythm of the show.

Many of the originals were R&B ballads penned by keyboardist Joseph Wooten (of the Steve Miller Band), including the ballad “Make Me Like a Child,” composed in memory of their late brother Rudy, a saxophonist in the band who passed away in 2010.

It was a rarity to see Roy “Futureman” Wooten play an actual set of trap drums. Best known for his antics playing the drumitar (a futuristic guitar-like electronic percussion instrument) with Bela Fleck & the Flecktones. He proved equally adept at playing acoustic drums, though his set up was still unconventional with the bass drum lying down horizontally, so it could be played by hand instead of by foot.

Eldest brother Regi Wooten held down the position of lead guitar, firing up a mind-melting medley that started out with sounds resembling an electric keyboard, and then morphed into a quotation of Jimi Hendrix’s “Little Wing,” Led Zeppelin’s “Kashmir” and eventually “The Star Spangled Banner.”

Victor Wooten – the most famous of the brothers – showcased his much deserved reputation as the monster bass player that has been named “Player of the Year” by unleashing his usual funky rhythms, slap styles and even playing an acoustic bass during a composition dedicated to John Coltrane. There was also a snippet of the Flecktones’ 1990 hit “Sinister Minister” thrown in for good measure.

Playing was interspersed with banter regarding the family and their history in music. Far from an overnight success story, the brothers shared and displayed their experiences playing a wide variety of music genres, including country & western, polkas and cocktail lounge music.

Success and fame did not come overnight to the Wooten Brothers. However, there’s no denying that paying their dues just might have been the key to their collective and individual success as stellar musical performers.

SECOND OPINIONS:
Jeff Nania’s review at Metroland
Excerpt from Michael Hochanadel’s review at The Daily Gazette: “Practice makes funky, and soulful; even jazzy. Another truth about the Wooten Brothers on Sunday at The Egg: bad weather; good show. The four Nashville-based siblings have played together since their ages were single-digits — Joseph turned 52 on Sunday — and a big part of their playing time has been together. Despite jobs in other bands, playing together is a homecoming for them. Whenever Bela Fleck’s Flecktones go on hiatus, bassist Victor rounds up his brothers and hits the road. While the great drummer JD Blair is often on Victor’s gigs, Sunday’s show featured brother and Flecktones bandmate Roy ‘Futureman’ plus keyboardist Joseph (of the Steve Miller Band) and guitarist Regi — the eldest, revered as ‘the teacher.’ The Wootens could teach most other funk bands what to do. They started and ended, more or less, with Sly & the Family Stone, introducing themselves in ‘Dance to the Music.’ Joseph led early, but Victor impatiently quick-changed from ‘Jungle Boogie’ into a Joseph vocal showcase on ‘If You Want Me to Stay’ that blurred into ‘Everyday People’ and ‘Stand.’”