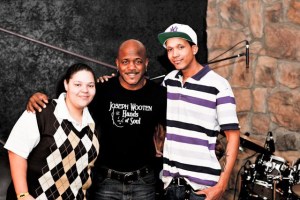 BUFFALO, N.Y. — A new group in Buffalo is determined to help the community through one act: love.

They call themselves “Love It Forward,” and on Saturday evening they’re throwing their first event at St. John’s Grace Church. It’s donation-based, and funds will go toward creating a place youth in the inner city can express themselves in a positive way – through music.

Joseph Wooten, keyboardist with The Steve Miller Band, has joined the cause and has even been playing music with some inner city students.

And at Saturday’s fundraiser, held at St. John’s-Grace Episcopal Church on 51 Colonial Circle at 7 p.m., he and those students will perform an inspirational song he wrote, called ‘I Matter.’ The lyrics speak to youth, single parents or anyone who has ever struggled.

“The way I feel, everybody needs help at some point, I needed help when I was young,” said the three-time Grammy-nominated artist who has been with The Steve Miller Band since 1993. “And the more connection we can create, the better – from quote-on-quote famous people to people who aren’t famous to anybody helping anybody. I’m just trying to help as many people as possible.”

Proceeds will go toward creating a safe place where youngsters can positively express themselves through playing and recording music with instruments and advanced equipment, said Amy Gallagher, the co-founder of Love It Forward.

Amy defines her organization simply: “Spreading acts of kindness throughout our human community.”

“Love It Forward is special to me because it’s finally an organization doing what people should be doing anyway – which is just using, in their words they’re using love, but it’s just care,” Wooten said. “When you care about each other you make connection, and when you make connection you help people, and the more people help each other then the better off we are.”

Amy looks forward to the next cause she and Brown will take on in the pursuit of kindness throughout Buffalo and, eventually, throughout the country.