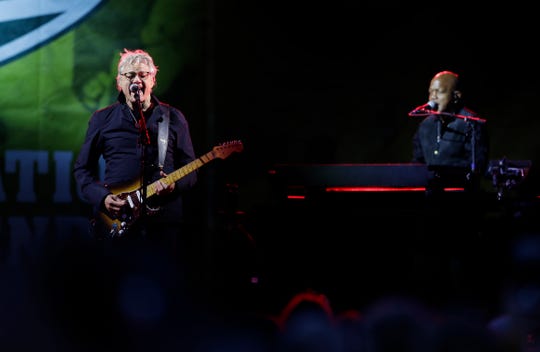 . . . the fiercest, most unexpected moments . . . they came from singer/keyboardist Joseph Wooten, who earned some of the night’s biggest applause for his dazzling solos on “Fly Like an Eagle” and “Take the Money and Run.” Jaw-dropping stuff.

Here’s what I call Steve Miller of The Steve Miller Band: A pop-rock legend with a laid-back vibe all his own.

That famously chilled-out attitude was front and center Wednesday night at Suncoast Credit Union Arena in south Fort Myers, where Miller and company played an 80-minute set full of nothing but hits — except for a brief and unexpected detour into the Chicago blues (at which point, you’re thinking: “Oh yeah! I forgot the Steve Miller Band was kind of a blues band, too”).

I’d hoped Miller and company would uncork their ’70s hits and really cut loose with some fiery solos and sweaty performances. But nah: This is Steve we’re talking about. So they kept everything tasteful, pleasant and pretty much as you’d expect.

In fact, the fiercest, most unexpected moments didn’t come from Miller at all — they came from singer/keyboardist Joseph Wooten, who earned some of the night’s biggest applause for his dazzling solos on “Fly Like an Eagle” and “Take the Money and Run.” Jaw-dropping stuff.

Steve Miller did impress, though, just in a less flashy or predictable way. There was that cool, reverb-drenched solo on the funky breakdown to “Eagle,” for example. And a positively ferocious solo on an instrument you wouldn’t expect — the harmonica — during “Living in the U.S.A.”

For the most part, though, the Steve Miller Band kept it simple on the Suncoast stage: Just five guys, all dressed in black, against a banner featuring the band’s famous Pegasus logo. Miller planted himself in front of his microphone stand and shimmered in his sparkly blazer as he delivered hit after blissful hit.

Sure, his vocals could have been stronger. And the sound system didn’t do the band any favors, often burying the songs’ choruses deep in the mix.

Then again, Miller’s voice — while memorable and distinctive — has never been the most powerful thing in rock ‘n’ roll. He’s not known for belting it out. Again: Laid back and chill.

No, Miller’s always been about the vibe and especially the songs. And he and his band played every hit you could possibly want. “The Joker” was there, of course. Miller saved that for the encore, as if there was any chance he could leave without playing that enduring stoner anthem.

“Rock’n Me” was there, too. And “Jet Airliner” (the hardest rocking song of the night). And the buoyant country fun of “Dance, Dance, Dance,” with the audience clapping along like it was a hoedown. And that detour into the Chicago blues, thanks to covers of K.C. Douglas’s  “Mercury Blues” and Elmore James’ “Stranger Blues.” And the sky-high dreaminess of “Serenade From the Stars” with its cool Middle Eastern vocal runs (although those were toned down, sadly, for the live show).

The night’s biggest surprise: The band’s stripped-down version of their biggest hit, “Abracadabra” — their only Top 20 hit from the ’80s. Gone was the song’s poppy studio sheen, replaced by a raw rock sound and a refreshingly different phrasing on the verses. It reinvigorated a song that was never one of my favorites, mostly because of that silly “I wanna reach out and grab ya” chorus.

Then there was Miller’s unusual “sitar-guitar,” an instrument that got its own introduction. “It’s a real special guitar,” Miller told the audience. “I bought if for $125 back in 1965. … The best thing about it is it’s got 19 strings and it sounds like this …”

Then he launched into “Wild Mountain Honey” — a song even more laid back than usual  — with its ethereal sitar and hazy harp sounds, all played on that wonderful, weirdo guitar decked out in lipstick-tube shaped pickups and “simulated purple alligator skin.”

I just wish the band had taken more chances with the rest of their set. Everything sounded pretty much as you remember: Relaxed and without many rough edges. Just smoothed-out, blissed out, groovy hits with super-catchy choruses.

If you want more energy and fiery solos, you’ll just have to stick around until the Joseph Wooten Band becomes a thing.