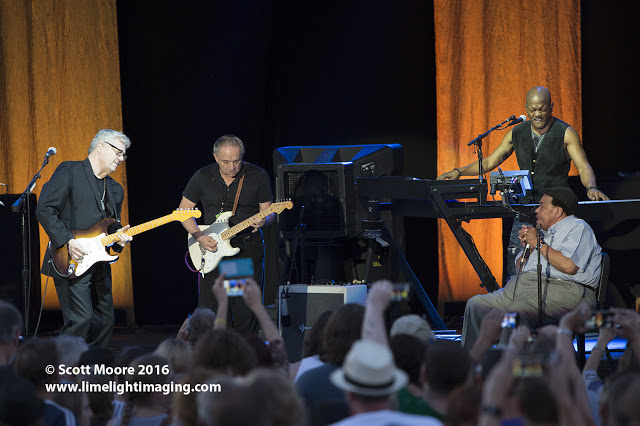 From Covering the Limelight

Rock and Roll Hall of Fame inductee The Steve Miller Band stopped by Austin’s newest music venue, The Statesman Skyline Theater at The Long Center in beautiful downtown Austin for a show on July 26, 2016. The band is in the middle of their 2016 North American tour.

The band is lead by 1970’s legend vocalist, guitarist, and songwriter Steve Miller. Backing Miller up this night were Austinite Jacob Peterson on guitar, Gordy Knudtson on drums and Joseph Wooten on keyboards.

Sitting in with the band for several songs were Miller’s very special guests for the evening,  blues legend James Cotton and Austin guitar great Jimmie Vaughan.

Miller’s fans were thrilled to hear many of the legends hits including Jungle Love, Abracadabra, Living In The USA, I Want To Make The World Turn Around, The Joker, Rock’n Me, Fly Like An Eagle, Space Cowboy, Take The Money And Run, and Jet Airliner.